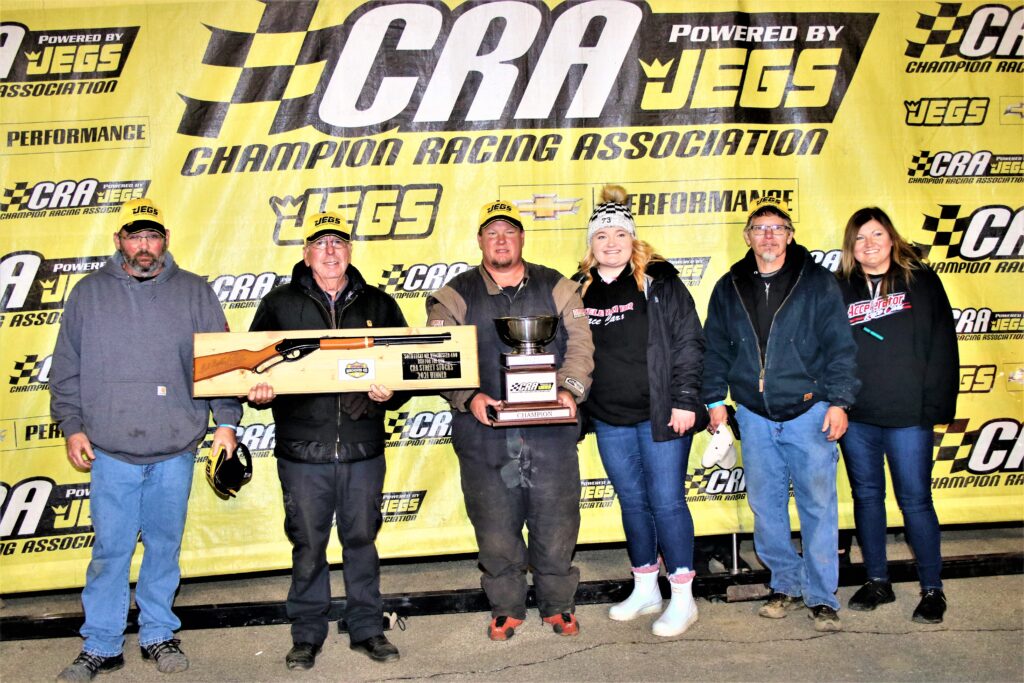 Salem, IN (October 19, 2021) – New Castle, Indiana racer Jason Atkinson put the final exclamation point in a record season with the Van Hoy Oil CRA Street Stocks Powered by JEGS in winning Saturday night’s Van Hoy Oil Season Championship 40 on the famous High Banks of Winchester Speedway. Atkinson battled past fellow Chase for the Championship driver Josh Poore to get the win, his record seventh of the 2021 season in claiming the win and his third series Championship.

“We had a great season, and this was the perfect way to cap it off”, remarked Atkinson in victory lane. “I have to thank my car owner Danny Acrey for letting me drive this car, everyone on the crew has worked hard all season, we got lucky with no bad luck and no DNF’s and never finished out of the top three in any points event the entire season. I want to thank CRA for putting these races on, Van Hoy Oil and JEGS for supporting our series. There’s a lot of good racers in this deal, it means a lot to get seven wins this year and another Championship!”

With Saturday’s tight schedule after Friday night’s events had to be added to the series only got a 15-minute practice session, then they group qualified with veteran CRA competitor Jeff Lane setting Allstar Performance Fast Time and drew a five for the events inverted start putting Poore on the pole.

Poore grabbed the lead on the initial start while Atkinson started working his way to the front. Atkinson got to Poore’s bumper and the two battled for several laps with a race win and the series 2021 Championship on the line.

Chase for the Championship contender Andrew Teepe was eliminated from the Chase and the race after a lap 23 crash that also took out former series Champion Jake McElfresh.

Atkinson clearly had the faster car, but Poore was doing everything he could to keep Atkinson from getting around him. Atkinson finally made the inside move and pass to take the lead. Atkinson would go on to win by over a second and claim his record seventh win of the season with the series and increase his series all-time wins lead. Atkinson finished second in two events and third in the other series points event in 2021, a truly dominating season for the now three time series Champion, who also won the Championship in 2014 and 2015. Atkinson joins Joe Beaver as the series only three-time Champion.

Poore would finish the race in second and second in the series Chase for the Championship, Poore picked up the KRJ Race Products Sweet Move of the Race Award for his hard-fought efforts to keep Atkinson behind him.

Jason Thompson would race in the top five throughout the event and got a third-place finish. Calvin Parham would make his first series start of the season and raced from his 11th place starting position to finish in fourth and earned the Van Hoy Oil Hardcharger Award. J.J. Schafer would finish in fifth place.

Bobby Comer came from his 13th place starting position to finish in sixth place, earning the Van Hoy Oil Sweet Move of the Race Award. Dawson Phillips would finish in seventh after starting 12th, he was the series 2021 Rookie of the Year and earned the Van Hoy Oil Highest Finishing Series Rookie Award and it’s $150 cash bonus. Phillips finished third in the series Chase for the Championship. Teepe’s early exit left him fourth in the Chase.

More information on all the CRA series is available at www.cra-racing.com.