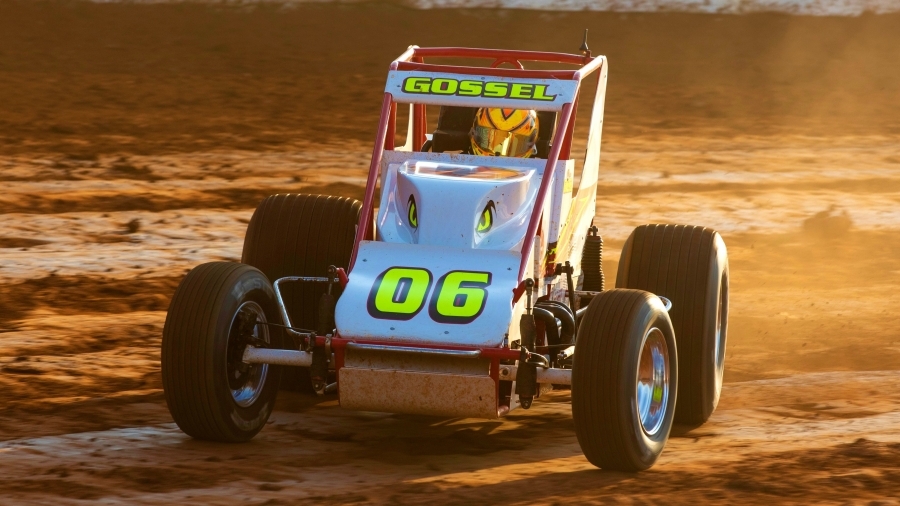 Winchester, Indiana (May 5, 2021)………Bryan Gossel jumped into the USAC Silver Crown cars with both feet in 2020.  Donning zero previous Silver Crown experience and just as few laps without a wing atop his car after chasing ASCS and Winged Sprint Cars on dirt and pavement throughout the majority of his career.

At the end of the first Silver Crown season, Gossel stood ahead of all other first year drivers in the point standings and was the lone Rookie to start all five events.

Right from the get-go, in the season opener at Selinsgrove (Pa.) Speedway, Gossel’s intention in the early stages of practice and qualifying was to take care of the equipment and be there at the end.  Despite qualifying 19th in the 24 car field, Gossel remained true to his plan, preserving his tires, keeping his nose clean and avoiding the setbacks that were so prevalent for others throughout the 74-lap race during the night.

At the checkered flag, Gossel had advanced 15 positions to finish 4th, creating a historical statistical significance as one of just 36 drivers to finish inside the top-five in his first career start.  It’s something that had been done previously by the likes of USAC National champions A.J. Foyt, Rick Hood, Ken Schrader, Brady Bacon, Pancho Carter, Gary Bettenhausen, Jimmy Caruthers and Jeff Gordon.

With the first practice session, the first qualifying run and the first full race completed, Gossel reflected on the process of knocking each element out of the way on his path to learning and getting increasingly comfortable in his new digs.

“It was all about getting those firsts out of the way and finding out what I could actually do with the car and how hard I could drive it without being stupid, as a blunt way of putting it,” Gossel explained.  “Getting all those firsts out the way definitely sets us up to do better this year.  Just learning how to run 100 laps too; I think the most I’d ever run before was 40, maybe 50.  I hit the gym hard and prepared myself to be physically ready.”

“All the extra work that goes into having a Silver Crown car – the starters, the clutches and stuff like that.  Getting all that ready was the biggest hurdle,” Gossel noted.  “Especially with the pavement car because I don’t think we finished one of the pavement races and had a mechanical failure every time out there.  That definitely hurt our performance and just struggling to finish races isn’t fun.”

A turn four crash during the Hoosier Hundred at the Indiana State Fairgrounds in the penultimate race of the year put Gossel’s shot at Rookie of the Year in the balance with just one final race looming at the Illinois State Fairgrounds dirt mile in mid-October.  On a cold and blustery day, Gossel recalls it vividly for the challenge and the ultimate perseverance to reach their season’s goal.

“That was a lot of work just to get there,” Gossel recalled.  “After crashing the car, we put it together.  Then, we had a transmission issue from the crash the race before which it bent something internally in the transmission.  That put us behind, then the brakes were not good in that car, which made it not so fun to drive or as competitive as I wanted it to be.”

Gossel managed the hand he was dealt, and much as he learned in Selinsgrove, he had found how hard to push, when to push, and, ultimately, finished the finale.  After checking with USAC officials on the final point tally in the post-race, Gossel discovered his name to be five points ahead of Logan Seavey’s in the Rookie standings, clinching himself a place in the record books.

“That was the cherry on top,” Gossel exclaimed.  “It was a dream come true to get Rookie of the Year and getting going with the series.  It was just so much fun and made it all worthwhile.”

Gossel, the cousin of past Huset’s Speedway (S.D.) and Jackson (Minn.) Motorplex sprint car champion Marlon Jones, took on the Silver Crown series as a way to step up in competition while also creating himself a more manageable schedule to balance between his on-track activities and his role as the president of BG Automotive.  So far, so good, and he likes what he sees with his personal enthusiasm for the sport matched by those in the Silver Crown series.

“The amount of fans and press that were there was pretty cool to have, and that solidified why I came to the series,” Gossel explained.  “Having 12 Silver Crown races to run instead of running 60 to 100 nights a year, and where I’m at in life, it’s just fun going out to have fun and run against a higher level of competition to make myself better.  I knew the level of competition was going to be tough no matter what, and to have some of the finishes I did made me feel pretty good.”

For many of his racing years, Gossel has been a combined owner, driver and crew chief.  Prior to the 2020 season, the 44-year-old driver added the fountain of knowledge of Scot Hersh as his crew chief.  Hersh, a Colorado Motorsports Hall of Fame inductee in his own right, helped guide a bevy of USAC National Midget winners in his time and found great success with driver Mike Gregg in Rocky Mountain Midget competition as well as with USAC.

Gossel constructed a new dirt car for the 2021 season, and basically rebuilt the pavement car in addition to swapping out transmissions with a little bit of fab work thrown in, completely going through his cars via a fine tooth comb with the crew around him, a group of people he’s prideful of having in his corner.

“I feel so blessed to be around these people and have help that I have,” Gossel beamed.  “That has been so phenomenal.  I’ve been after Scot to help me for like 20 years, and to have his help and his connections, and to have (car builder and USAC Hall of Famer) Bob East allowing me to keep my stuff in his shop, to have all those connections, it’s like ‘holy cow,’ this is pretty cool.”

On race day at Winchester, the pits open at 9am ET with the drivers meeting set for 10am, practice at 11am, Fatheadz Qualifying at 1pm, a driver’s autograph session at 2pm, opening ceremonies at 3pm and the 100-lap main event at 3:30pm.

Reserved seats are $30 apiece, while general admission tickets are $20, and just $10 for children aged 6 to 12.  Tickets are available in advance at www.winchesterspeedway.com/tickets.

The race will be shown LIVE on FloRacing at https://bit.ly/3frPoW6.