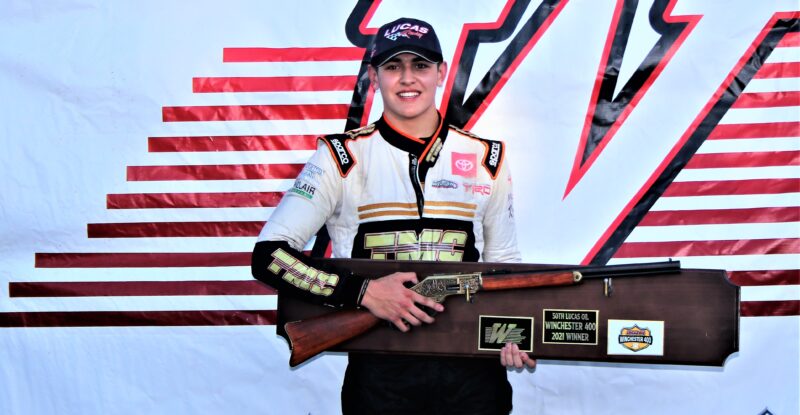 WINCHESTER (IN) – The running of the Lucas Oil 50th Winchester 400 Presented by JEGS for the ARCA/CRA Super Series Powered by JEGS on the famous High Banks of Winchester Speedway went out with a bang and will be a topic of discussion for years to come.

With the event using Competition Cautions after every 50 laps, tire strategy became a factor at the finish.

Jack Smith, who only accepted the ride in the Team Platinum Chevrolet a couple of weeks ago, took the lead of the Winchester 400 on Sunday on lap 333 with an outside pass of Sammy Smith.

The caution flag waved on lap 378 when all the lead lap cars except for Jack Smith pitted for tires.

Another caution flag waved when Stephen Nasse spun on the front straight which set up a five-lap sprint to the finish.

Sammy Smith quickly moved into the second spot by passing Eddie VanMeter and closed on the rear bumper of Jack Smith.

On the final lap Jack Smith got loose coming off the second corner and Sammy Smith made his move to the inside.

Before the two leaders reached turn three there was contact with Jack Smith making contact with the outside retaining wall and Sammy Smith sent to the tail of the lead lap for a run to the finish.

Jake Garcia started on the point and scrapped the turn two wall which allowed Sammy Smith the take the lead and the victory over Nasse and VanMeter with Garcia coming home in fourth, the only cars on the lead lap.

Georgia driver Dusty Williams started 22nd in the field and drove to a fifth-place finish, one lap behind the leads.

“It was a good call on tires,” Smith said in victory lane. “I had a good run on the inside of him (Jack Smith) and I felt he came down on me, but I wasn’t lifting.”

Nasse had off and on issues particularly in the middle stages of the event.

He came from three laps down to the leaders to challenge for a second Winchester 400 victory.

“I couldn’t push it at all,” Nasse, said, “the vibration on the front straight was terrible.”

VanMeter ran most of the race without power steering.

“We pitted for tires with 20 laps to go but I couldn’t turn the car in the corners,” he said.

An obviously upset Jack Smith was credited with a sixth-place finish.

“It’s unbelievable,” he said of the last lap incident. “There was no respect.”

It was a tough day for race leaders with early leader Chandler Smith having an electrical issue while leading, Dalton Armstrong broke a shock mount and Hunter Jack had a left front suspension brake while leading.

Jack’s crew made repairs allowing him to drive to a 12th place finish which was good enough to win the 2021 ARCA/CRA Super Series Championship in the series 25th Anniversary Season.

Anderson’s Josh Ebbert got caught up in an incident on lap 79 with Carson Hocevar with the car of Muncie’s J.P. Crabtree flipping in turn two.

The race featured 13 lead changes among seven drivers, was slowed by two red flags and 13 caution periods for a total of 64 laps.