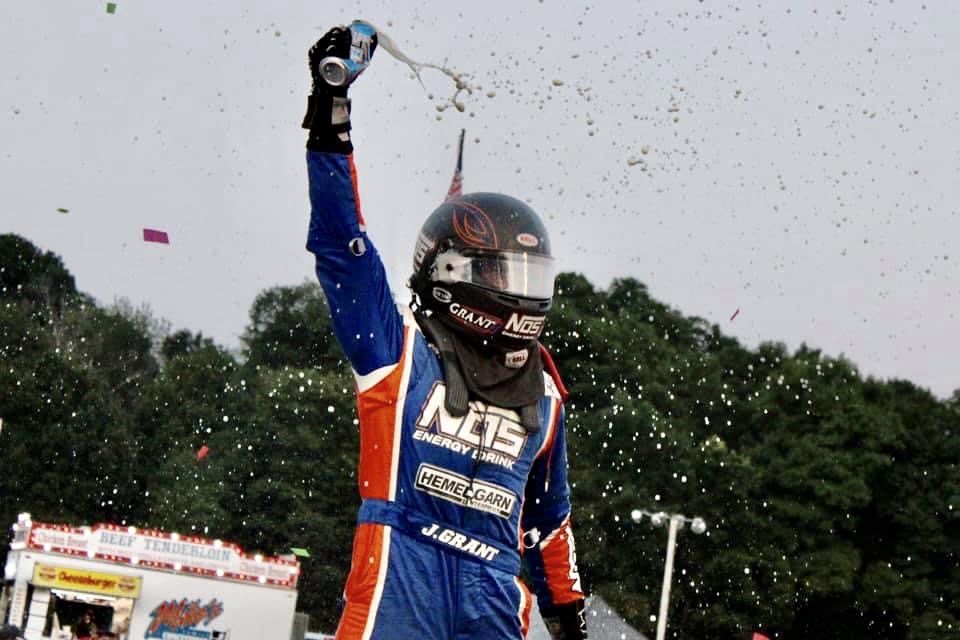 Driving that point home is the fact that the driver chasing Grant on the green-white-checkered dash to the finish, Kody Swanson, posted his fastest lap of the race on the 100th and final lap in his pursuit of the win.

Simultaneously, Grant answered the bell by laying down his fastest lap of the entire race on the 100th and final lap to keep Swanson behind him.

At the line, Grant finished just a miniscule half car length ahead of Swanson in a dramatic ending to the heavyweight slugfest in the series’ debut on the 37-degree banked, three stories high oval.

Now a fully-fledged, first-time USAC Silver Crown winner on the pavement, the triumph marked Grant’s first of any kind on a hard surface since a BCRA Midget feature score in 2006 at California’s Madera Speedway.

“It’s a bit surreal for me to be standing at Winchester as a winner.  As a kid who watched races here on TV, thinking, ‘boy, that’s the gnarliest thing I’ve ever seen,’ I would’ve thought that was outside the realm of possibility growing up,” Grant exclaimed.  “I was a kid who dreamed of racing USAC and to come here and win means the world to me, and there’s not a better group of guys that I could do it with.”

The Rich Vogler Classic win was also extra special for Grant’s car owner, Ron Hemelgarn, who fielded Vogler as his driver in the 1987 Indianapolis 500, starting 11th and finishing 20th.

Standing in the Hemelgarn Racing team’s Gasoline Alley shop following the conclusion of last year’s championship season, crew chief Dennis LaCava had one more goal in mind that was still on the table for 2021 – winning a pavement USAC Silver Crown race.

“I’m really itching to get Justin (Grant) his first pavement Silver Crown win,” LaCava said at the time.  “I want to be able to say I was a part of that.”

That moment came Thursday night when Grant, LaCava and Hemelgarn made their ambition a reality by notching the team’s first victory lane appearance in nearly three seasons.  It was the third career series victory for Grant after tallying the Illinois State Fairgrounds and Terre Haute Action Track rounds in 2017 and 2018, respectively.

Grant started fifth on the Winchester grid in his Hemelgarn Racing/NOS Energy Drink – Super Fitness – Hemelgarn Enterprises/Beast/Speedway Ford and remained relatively status quo throughout the first quarter of the race as pole sitter Swanson launched away to lead the first four laps and outside front row starter Bobby Santos charged to the lead on lap five after diving to the bottom in turn three past Swanson.

Santos held strong up front until 16th running Patrick Lawson stopped in turn three to bring out the yellow.  Moments following the ensuing restart, third-running Aaron Pierce kicked a shine, stood up in the seat and cut below Swanson for the second position on the back straightaway, then under Santos exiting turn four to rise from third to the lead on the 23rd circuit.

In the resulting shuffle, Grant moved to second with David Byrne now third, while 15th starting Kyle O’Gara had raced his way all the way up to fourth.  Subsequently, Santos and Swanson were suddenly relegated to fifth and sixth, respectively.

Instantly, Pierce blitzed away to a two-second advantage over the field during the following 20 laps.  However, just before halfway, Grant had noticeably reeled Pierce in and was just a half-second back in the center of lapped traffic when 12th running Nathan Byrd began leaking fluid from his car, knocking him out of the race, and forcing another yellow.

With Grant on Pierce’s rear bumper, Grant made his bid for the lead on the 57th lap, deep sea diving low off turn four underneath Pierce.  Though he came just a wheel short of the lead on that lap, Grant carried his substantial momentum into turn one, and despite getting squirrely on entry, got the handle back and motored past Pierce for the lead on the 58th trip.  Seconds later, Swanson found his way back to second while Santos slotted into third, pushing Pierce back to fourth.

Grant candidly stated that he had never felt this good on pavement before in his career as he waded through lapped traffic, with holes developing just when he needed it at exactly the right time to keep Swanson’s relentless pursuit at bay.

Keenly aware of Swanson’s prowess of winning races by virtue of his marksmanship in lapped traffic, Grant sought every edge he could muster to push through and gain some much needed breathing room.

Grant acknowledged he pushed a little harder early on in the race and felt that Swanson had saved his equipment at the forefront of the race.  But the reasoning behind that particular tactful gameplan was sound with Grant not desiring to put himself in the position of having to pass Swanson late in the race.  Instead, he wanted to force Swanson into having to find his way around him late.

However, when Shane Cottle’s Panhard bar broke with 15 laps remaining, causing him to spin atop the turn four banking, all gameplans were out the window.  All that stood in front of Grant was the driver who stood behind him – Swanson.

After hyping himself up even more, Grant forged ahead when racing resumed with eight laps to go.  Swanson maintained his position just two car lengths back and was right on the rear bumper of Grant when the yellow dropped for 10th running Austin Nemire who spun to a stop in turn two, putting Grant in the position to now have to again outduel Swanson, the five-time series champion, in a green-white-checkered showdown.

“On the green white checkered, with the tires and brakes a little cold, I ran 90-95 percent on lap one and, on lap two, I ran it 100-110 percent,” Grant explained.  “I about gave it away in three and four.  I smoked it down in there kind of low to protect my entry a bit because I had been passing guys by diving underneath them into three, but I didn’t get in as deep as I think I needed to, and I didn’t make it up the hill; I landed short.  It made my apex tight, and I got a little push coming off, like ‘oh no, that’s not good.’  I tried to get it turned back down the hill and, man, I thought we beat Kody to the line, but he was sucking my stickers off right at the line.  Like, ‘did we get it, did we get it?’

Swanson finished as the runner-up ahead of Bobby Santos, Aaron Pierce and Kyle O'Gara who finished a career-best fifth after starting 15th, which earned him both the KSE Racing Products Hard Charger Award and the GSP Quality Driving Performance of the night.

Swanson is a great friend of Grant’s beyond the racetrack.  In fact, Swanson was ordained and officiated Grant’s wedding to wife Ashley.  However, the two have a Silver Crown embargo.  As fellow competitors, they don’t allow themselves to talk about Silver Crown racing, but the two provided plenty for the people to talk about on Thursday night.

Kody Swanson (Kingsburg, Calif.) earned his third podium finish in three USAC Silver Crown starts this season aboard his Doran Enterprises/Glenn Farms – Lykins Energy Solutions/Beast/Lanci Ford after winning at Lucas Oil Raceway and finishing third at Eldora.  Those three performances have pushed Swanson into the series point lead despite missing one race at the Williams Grove Speedway race in June.

Likewise, Bobby Santos (Franklin, Mass.) collected another podium finish this season in the DJ Racing/Brown & Miller Racing Solutions – Simpson Race Products/Beast/Speedway Chevy after earlier finishing 2nd at Lucas Oil Raceway in May.  Santos led 63 laps at LOR and 18 more Thursday night at Winchester for a total of 81, which leads all drivers in that category this season.