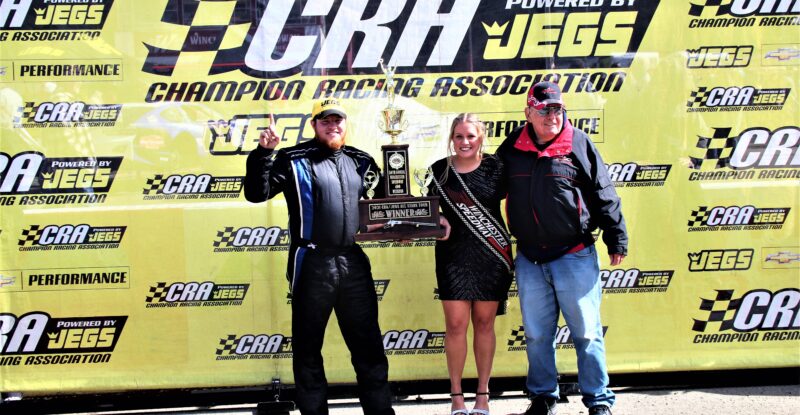 “Wow, I can’t believe I got the win here at Winchester!”, remarked a very excited Beach in victory lane. “This is a dream win for me, something I’ve always wanted to get, especially being on Winchester 400 Weekend. The car really came to life at the end of the race, I just gave it everything I had, and we got it done. I’m just shocked that we did it. I have to thank everyone who helped me get here, my car owner Chris Munson, and the whole crew and everyone at VanDoorn Racing Development! This feels great, I’m on top of the world right now!”

The 2021 Season Championship event for the series was originally scheduled to be 100 laps and take place on Friday, but Mother Nature had other plans as multiple stoppages for rain caused the event to be moved to Saturday morning and shortened to 75 laps to help with the already busy schedule of events at the track that day.

Pole sitter Billy VanMeter dominated the first portion of the event, leading the first caution free 50 laps until the first segment of the race was checkered at lap 50, setting up the final 25 lap sprint.

On the lap 51 restart VanMeter and series rookie and Chase for the Championship contender Andrew Scheid got together with both cars spinning and suffering major damage, ending the day for both. Second place running Cody Coughlin also had damage but was able to rejoin the field at the tail of the field. That incident gave the lead to Smith on the next restart.

Beach kept his car out of trouble and steadily worked his way to the front avoiding a lap 69 incident involving Chase for the Championship competitors Chase Burda and Coughlin, with Coughlin again forced to pit for damage, but was able to return, unfortunately Burda’s car was too damaged to return.

Smith kept the lead on the lap 70 restart with first time series competitor Luza in second. Beach was able to get past Luza, then dove to the bottom of Smith and was able to make the pass and grab the win by just over a second. Beach picked up several awards including a Hoosier Race Tire Performance Award for coming from his 16th place starting position to get the win. He also picked up the Sweet Manufacturing Sweet Move of the Race Award for his pass of Smith to grab the lead and his Pit Crew earned the PitBoxes.com Pit Crew of the Race Award.

Smith would finish in second in his first series start with the Platinum Motorsports Team after starting 11th and earned the AR Bodies Cool Move of the Race Award. Texas native Luza would finish in third place.

Coughlin would come back to finish in fourth place despite being involved in two on track incidents and was the highest finisher of the four Chase for the Championship drivers, giving him his fourth JEGS/CRA All-Stars Tour Championship, he also won the Championship in 2013, 2016 and 2020.

Wisconsin native Nick Egan would come from his 12th place starting position to finish in fifth place in his series debut. Colby Lane would finish in sixth place.