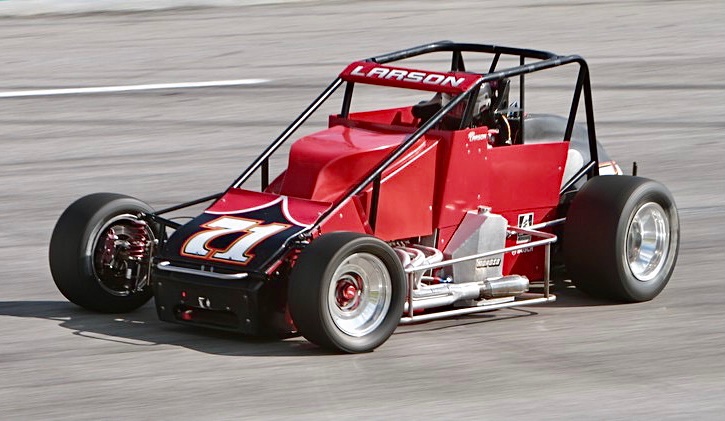 USAC is scheduled to make their return to the high banks of Winchester Speedway on Sunday, May 9 for the Rich Vogler Classic featuring the USAC Silver Crown Champ Car Series for the first time.  It will mark USAC’s first sanctioned race at the World’s Fastest Half-Mile in 10 years.

Let’s look into our time capsule at that last USAC-sanctioned race at Winchester, which was also the most recent Rich Vogler Classic held at the facility and the final USAC Sprint Car race held on pavement before switching to a fully-dirt series.

The date was September 18, 2011.  The USAC National Sprints made the trip to Winchester for the fifth and final pavement race of the season.  Current Little 500 champion Bobby Santos III had won the most recent paved race for the USAC Sprints at Lucas Oil Raceway a month before.  Meanwhile, Casey Riggs had just won his second and final career USAC Sprint feature on the dirt the night before at Tri-State Speedway in Southwest Indiana.

A strong field of drivers were on hand for the Rich Vogler Classic.  Santos was looking to hold on to the USAC National Sprint pavement points lead that day, but had to battle the likes of Tracy Hines, Chris Windom, Kody Swanson and a young Kyle Larson.

Hines was the fast qualifier that day, with a time of 14.015 seconds.  Aaron Pierce won the first heat race over Jacob Wilson and Hines, while Larson took the second heat win over Windom and  Brian Olson.

The 30-lap feature to decide the Rich Vogler Classic champion would be all Tracy Hines.  It took the USAC Triple Crown champion just 12 laps to drive from sixth to the race lead.  He then led the final 19 laps to take the win over Bobby East, Windom, Kody Swanson and Larson.

The final USAC Pavement Sprint race was set to be held at Lucas Oil Raceway, but mother nature would postpone, and eventually cancel that event.  USAC moved the Sprint Cars to a strictly-dirt schedule starting in 2012.  That memes the 2011 Rich Vogler Classic was the final pavement USAC Sprint Car race to date.  The event then moved to Lucas Oil Raceway in 2012 as a Silver Crown and Midget combination event before it strictly became a Silver Crown race.

Tickets for USAC Silver Crown’s inaugural visit to Winchester Speedway, and the return of USAC for the Rich Vogler Classic on Sunday, May 9, are available for purchase online at winchesterspeedway.com/tickets.

For more information regarding the Rich Vogler Classic, visit Winchester Speedway online at winchesterspeedway.com, or USAC at usacracing.com.