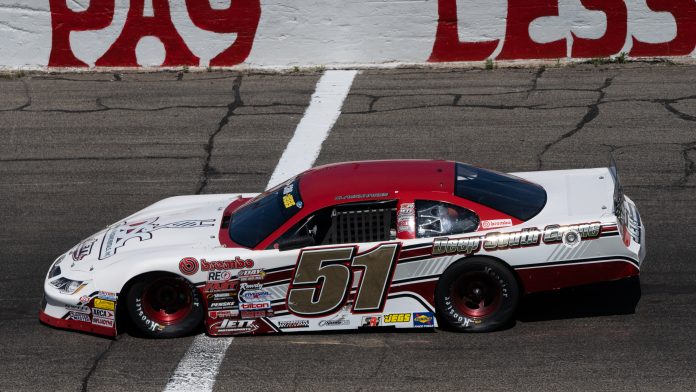 Nasse Aiming for the Hoosier Double Down in May

The Hoosier Double Down Bonus has attracted one of the biggest names in Super Late Model racing to the state of Indiana in the month of May.

Stephen Nasse of Pinellas Park, FL will attempt to capture the extra $10,000 bonus if he were to be victorious in both the Fly Over States 150 at Winchester Speedway on Tuesday, May 18 and Spring Fling 125 at Anderson Speedway on Saturday, May 22.  Both races are within four days of each other in central Indiana.

“I’m really excited; it’s two of my favorite racetracks with Winchester being my favorite and Anderson being a tight, high-banked little bullring.  It’s really fun going there,” Nasse said.  “I usually have good speed at both places so it’ll be really exciting.  I’m hoping we can get a good, clean finish there at Winchester and take the No.51 on at Anderson and pick up two wins in one week.”

CLICK HERE TO PURCHASE TICKETS TO FLY OVER STATES 150

Nasse has three wins at the World’s Fastest Half-Mile, all coming in 2019 when he won three of the four Super/Pro Late Model races held at Winchester.  One of those wins came in the Winchester 400, where he led a record 392 of 400 laps to score the biggest win of his career.

With the inaugural Fly Over States 150 coming up, he is hoping his name will be on top of the list of race winners.

“It’s going to be big.  I’m hoping it’s going to get plenty of fans.  When we come over to Winchester you usually think 400 and the Labor Day weekend to get ready for the 400.  This is a little bit different; it’s a little bit earlier in the year.  I think Bob’s done a good job and has a good idea with his plan at Winchester Speedway.  I think it’s going to be a great race and I’m expecting a good crowd to come along with that.”

While he has a trio of wins at Winchester, Nasse has yet to visit victory lane at Anderson.  His best finish to date at the quarter-mile bullring was a third in the Redbud 400 back in 2017.

While he has seven previous starts at Anderson, all of those came in the Redbud, which are long-distance races of 300 and 400 laps.  With just 125 laps in Saturday night’s race, it adds a whole new dimension that Nasse has yet to experience at Anderson.

“It’ll be really different, a lot more aggressive I think.  Don’t get me wrong, Anderson’s always aggressive, but 400 laps is a long race and you still have to be patient.  When it comes down to 125 laps it’s a different ballgame; you have to be a little more hard nosed.

After recently announcing the formation of Stephen Nasse Motorsports, he says a $10,000 bonus would go a long way towards building the program.  The Stephen Nasse Racing – Driver Development Program made its debut on May 2 with Michael Hinde behind the wheel at Auburndale Speedway, while Nasse himself competes in his first race with his own team on Saturday, May 8 at Nashville Fairgrounds Speedway.

“It would help out, just any kind of extra incentives to go run two races in one weekend and get a little bit of a bonus is always fun.  This whole deal with the new team with me and Chris Cater, it’s going to be a lot of fun.  I’m looking forward to all the traveling and definitely looking forward to getting back up to Winchester and Anderson.”

The entry form and schedule of events for the Fly Over States 150 can be found on the ARCA/CRA Super Series web site at www.winchesterspeedway.com under the drivers tab on the top of the screen.

The entry form for the Spring Fling 125 at Anderson Speedway is on the Champion Racing Association website at www.cra-racing.com.