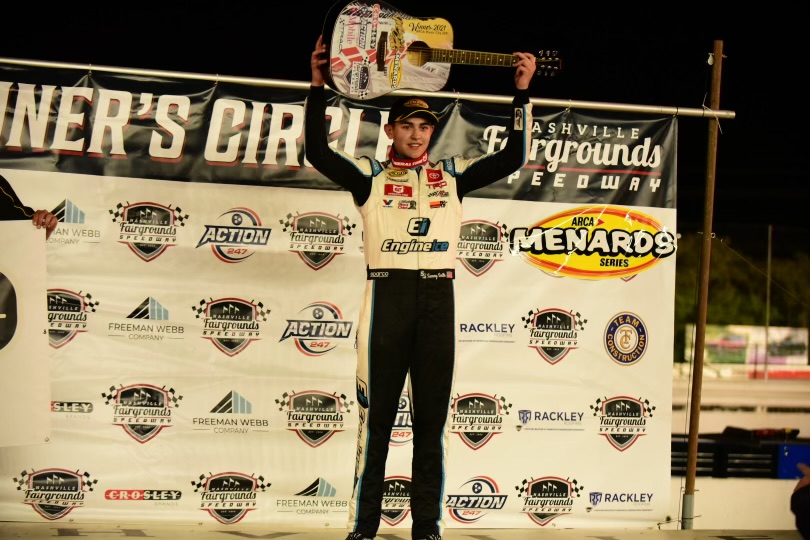 Sammy Smith enters the Fly Over States 150 with momentum on his side.  The Iowa driver leads the ARCA Menards Series East standings after wins at Five Flags Speedway (FL) in February and Nashville Fairgrounds Speedway (TN) just last weekend.

On the Super Late Model side, he has been in contention for the win in every race he has entered since joining Wilson Motorsports for the World Series of Asphalt.

With a strong start to 2021, Smith is feeling confident going into the inaugural Fly Over States 150.

“I feel really good.  We’ve had a strong Super season this year; we’ve had really good cars at every race we’ve been to.  I’m really looking forward to getting to Winchester and getting us a strong run to get ready for the 400.”

The 16 year old enters the race under the watchful eye of former All American 400 winner Donnie Wilson, who has done nearly everything but win at Winchester.  He has come close to winning at the World’s Fastest Half-Mile both as a driver and as an owner, but has yet to do so.

If last year’s Winchester 400 is any telling, Sammy Smith could be that driver to hand Wilson his first win at the high banks.

“Donnie and his cars run really well at Winchester and we had a really good run going there last year at the 400.  We were running second and had a tire go down.

“Winchester’s one of my favorite racetracks,” added Smith.  “It’s a place you can move around a lot.  You can run the top; you can kind of run the middle and really move around during the race.”

Smith has two previous starts at Winchester under his belt, one in a Pro Late Model in 2019 and last year’s Winchester 400.  He finished sixth last October after a flat tire put him a lap down and out of contention.

With that start now under his belt, he feels more prepared going into next week’s Fly Over States.

“It was definitely a different experience for me.  We didn’t even get to test before the race.  It was a little tough.  We didn’t get much practice and had to adapt quickly.  I think going to Bristol really helped me out with getting prepared for that.  It definitely is a different track.  It has a lot of different characteristics of where you can run and how bad the tire wear is.  Overall, the racing is really good and it’s a fun place to run.”

While he has won during the World Series of Asphalt at New Smyrna Speedway, Smith has yet to score a victory in a longer-distanced Super Late Model event.  With a string of strong runs recently paired with a good outing at Winchester last October, he hopes the Fly Over States 150 will be that first win.

“We were really close at Greenville, I feel like we had a shot to win at the Rattler, but broke at the end.  Last weekend at Nashville we qualified bad, but we passed 11 cars during the race and was up to fourth during the race.  Hopefully we can pull off that first victory away from New Smyrna this year.”