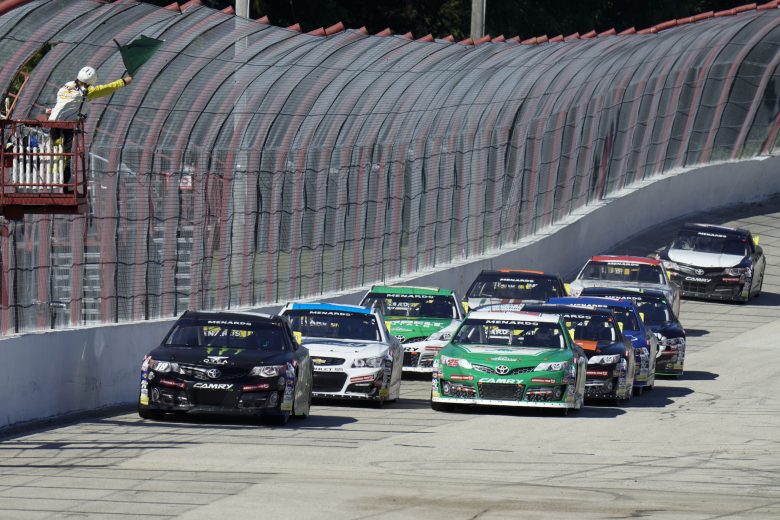 There will be a lot on the line when the ARCA Menards Series takes to the 37-degree banks at Winchester Speedway on Saturday night.

The Calypso Lemonade 200 is first and foremost a part of the ARCA Menards Series championship, and that championship battle is turning into a war between new leader Ty Gibbs and now challenger Corey Heim. Gibbs assumed the championship lead with his sixth victory of the season last Saturday night at Iowa Speedway, while Heim, who has four wins of his own this season, now sits second just four points behind.

Heim started off the season at Daytona International Speedway with his second consecutive series win, dating back to the 2020 finale at Kansas Speedway. Gibbs won at Phoenix Raceway to even the score at 1-1 headed to Talladega Superspeedway. Heim would take his second win of the year at Talladega, but the big story was Gibbs’ 27th-place finish after being swept into a late-race crash while battling for the lead. Gibbs would start to claw his way out of the deep points deficit with a dominant stretch, winning four consecutive races at Kansas Speedway, Toledo Speedway, Charlotte Motor Speedway, and Mid-Ohio Sports Car Course. Two of those wins, at Kansas and Charlotte, were flag-to-flag, the first time since 2012 that a driver had led every lap in an ARCA Menards Series race and the first time since 1978 that someone had done it twice in a season.

Heim broke the Gibbs dominance with a win at Pocono Raceway, and then nudged Gibbs out of the way on a late-race restart at Elko Speedway to take his fourth win of the year and hold on to a perilously small advantage in the series standings with his second consecutive victory.

The two front runners are also at the top of the heap in the Sioux Chief Showdown standings. The series-within-a-series allows drivers as young as 15 years of age to compete for a title on paved oval tracks a mile in length or less and road courses. Through five Showdown races so far in 2021 – Toledo, Mid-Ohio, Elko, Berlin, and Iowa – Gibbs has three wins to Heim’s one, at Elko. Daniel Dye, a 16-year-old from Deland, Florida who has recently moved into the No. 21 GMS Racing Chevrolet that Sam Mayer piloted to the Showdown title in 2020, took the victory in his second series start at Berlin.

The Calypso Lemonade 200 is also a part of the CGS Imaging 4 Crown championship, a four-race series-within-the-series that celebrates the diverse schedule of the ARCA Menards Series. The four races are spread across superspeedways, intermediate tracks, short tracks, and dirt tracks, in 2021 those events are slated for Kansas Speedway, Mid-Ohio Sports Car Course, Winchester Speedway, and DuQuoin State Fairgrounds. Gibbs won both of the previous races at Kansas and Mid-Ohio, giving him a dominant lead in the standings heading into a race that he won last year by leading 199 of 200 laps.

Tickets for the Calypso Lemonade 200 are available at selected Menards locations in western Ohio and eastern and central Indiana, including Indianapolis and Ft. Wayne. Discounted advance adult tickets are just $20, a savings of $10 per ticket. For more information, visit WinchesterSpeedway.com, TrackEnterprises.com. For updated event information, visit ARCARacing.com.