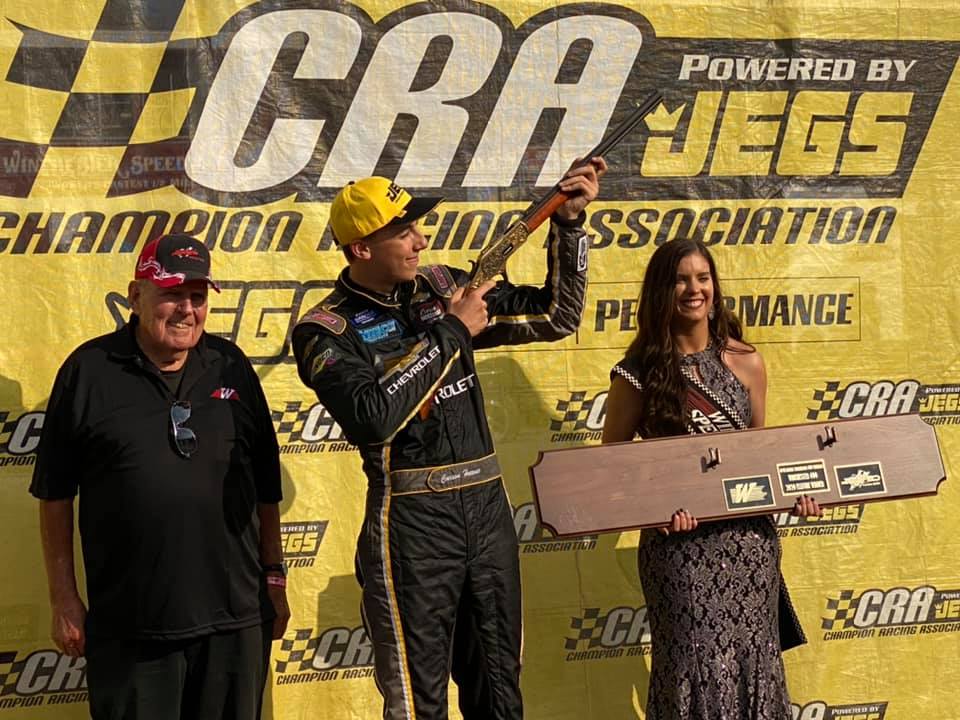 Defending Winchester 400 winner Carson Hocevar has filed an entry for the Fly Over States 150 on Tuesday, May 18 at Winchester Speedway  The Michigan driver now looks to go back-to-back at the World’s Fastest Half Mile.

The NASCAR Camping World Truck Series rookie was one of Super Late Model’s top drivers in 2020, winning six races.  One of those wins came in the Winchester 400, in dominant fashion after leading 342 of 400 laps last October.

ENTRY BLANK FOR THE FLY OVER STATES 150

After what was the biggest win of his career, Hocevar is primed and ready heading into the inaugural Fly Over States 150.

“My confidence going back to Winchester is going to be really high.  After you get a big win there, or at any place, and you go back to it, you go in expecting the same result and you’re already ahead in the game,” said Hocevar.  “You don’t need to play catch-up or anything for the next time you’re there.  We’ll be able to unload with a very similar package that we ran at the 400 and we’ll be hoping for the same speed we showed there in October with the same result.”

He will be back with TK Racing for the event, the same team he won the Winchester 400.  In fact, Hocevar is undefeated in the No.71; he also won the Redbud 400 just down the road at Anderson Speedway with the team last July.

Anderson Speedway is holding a Super Late Model race on Saturday, May 22,  just a few days after the Fly Over States.  If Hocevar would be able to win both, he would pick up an extra $10,000 as part of the Hoosier Double Down bonus.

Looking back on his big Winchester 400 win seven months later, he took just as much pride in handing TK Racing their first Winchester rifle than he did in winning the crown jewel. Now crew chief Johnny VanDoorn has finished second in the race twice, including to reigning NASCAR Cup Series champion Chase Elliott in 2010, but had been unable to score the win in ten previous attempts.

“I think it was bigger for Johnny and Butch VanDoorn and Tom Kmak at that moment than it was for me.  It was my second attempt, so it was just a big crown jewel to me, but I think for them it meant a lot more. Seeing their emotion and finally closing that chapter and writing it off the bucket list after they tried checking it off for so many years made it even more special for me now that I’ve had time to process it all.  I was really thankful I could do it for VanDoorn and Kmak.”

After winning a JEGS/CRA All-Stars Tour race at the World’s Fastest Half Mile as a 14 year old in September of 2017, Hocevar was convinced his luck had run out at Winchester.  He was on his way to the series championship that October when a flat tire ended his title hopes.  He had shown speed in each of his five previous appearances before last year’s 400, but just didn’t have the results to show for it.

“I won the JEGS race and had some speed every other time I went, I just caught the Winchester luck of catching bad luck late in the race and getting a flat tire and mechanical failures.  That place is so demanding on equipment.  Every way I could’ve lost a race or a shot at running good seemed to happen.  I thought I had used up my luck the first time. I was like, ‘Was it was bad I won the first time out at Winchester?’ But,  I’ll take winning the Winchester 400 one time over a handful of little wins there anytime.”

His entry into the Fly Over States 150 makes him one of the favorites going into the inaugural Fly Over States event on May 18.  With another run at the rifle four months out, Hocevar is looking to add a third Winchester trophy to the collection.

“The Fly Over is a new race and anytime you can win one of these marquee events it would be big.  But, to win it right after the Winchester 400, those two wins would be a huge stepping stone for me going back to the Winchester 400 later in the fall.”